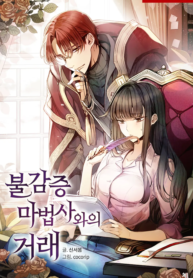 Hisran Epheshion, a flame wizard with a beautiful appearance and immense magical power.
His only weakness was that he couldn’t get an er*ction…!

Then, one day, Jaeha, a woman from another world, falls like a lightning bolt in Hisran’s secret space, and the manhood that has touched her ‘jumped,’ overshadowing his worries so far.

Hisran, noticing that he was excited by her, offers her a secret deal…

Jaeha was excited by Hisran’s words that if she cooperated in the treatment of his frigidity, he would grant her wish.

Ah, did someone with frigidity stand up in bed like that…?
Hisran quickly added to the fierce gaze as if she was looking at the world’s biggest liar.

A man with a fatal flaw and a woman with the key to solving the problem…
A treatment for the frigidity of love amateurs starts from the body!

If Hisran did not lose to others due to his unique handsomeness and arrogant personality, Jaeha was the one who had been struggling in life in order not to be defeated by other people and the world.

Her face reddened, arbitrarily tightening her lower body, she said,

“Your thing has grown again.”
“It’s because you are so delicious.”

After tasting her, Hisran lightly bit Jaeha’s earlobe, then slowly moved down along her jawline and kissed her. He licked her slender, white neck like a vampire and painstakingly engraved a red stigma.

It was clear that the neck was a much more sensitive part than Jaeha thought. Moreover, with the excitement mixed with fear of being attacked at a weaker part of her body, Jaeha fluttered like a butterfly caught in a web.

At that pitiful and lewd appearance, Hisran’s manhood swelled faster. His member, which once again boasted their majestic grandeur, rubbed her inner wall roughly.

As if labeling his territory.

0
A Deal With The Frigid Wizard