Handsome Men Give Themselves to Me! 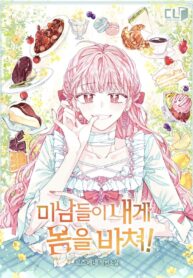 N/A, it has 6 monthly views

I abandoned my own world and jumped into the world of a novel.

A world where only beauties existed.

I had tried to enjoy my new world as much as I could, but…

Not only were there beauties, but zombies too!

And turns out, the dead woman I’d possessed had been bitten by a zombie.

So my mouth no longer watered at food but at people, they were the ones that smelled and tasted like food to me now.

Then the wizards dragged me to the duchy and used me as a guinea pig.

I just went along with it.

But what are these side effects?!

“It’s okay, you can do it with three people.”

I was surrounded by handsome men, each teary-eyed and clinging to me.

“If you like it then you can eat more…”

All of their efforts were dedicated to saving my life.

What’s wrong with these people?

You know I’m a zombie, why do you keep telling me to taste your body?

I was surrounded by four men when I woke up.

“You have to choose, which one of us do you want to spend the night with?”

Um, is this really okay?

The Maid In The Reverse Harem Game Wants To Quit

0
Handsome Men Give Themselves to Me!