I Became The Male Lead’s Pet 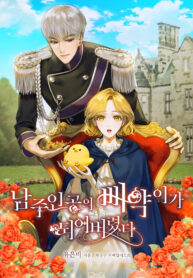 Also, the author dropped the suspension notice of the first part.
I lied down with tears in my eyes, praying earnestly.
I hope the second part will be there when I open my eyes.

But when I came to my senses,

“……I asked to be woken up after the hiatus of the novel… Have I ever asked to possess the body of a supporting character?”

I became a 12-year-old Ophelia, destined to become a maid of the same age for the female lead.
Now that it has become like this, I’ve decided to stop the tragedy of the two characters that I love, but…..
Getting caught in a battle between witches, I turned to a pet chick of the male protagonist.

“Cheep! Cheep! (I wanna go back home!)”
“Yeah, I feel the same as well.”
“Cheep! (You read my mind.) Chee. (Wait, you’re already there.)”
“There has never been such a cute being as you in my life, and there will never be. Next month…… let us have a ceremony with the elders of the imperial family.”
“Cheep. (What do you mean….?)”
“I wish to spend the rest of my life with a cute little thing like you.”

Uhh, how did things get like this?
Others may have possessed a dark supporting role or an extra, but at least they’re human.
But isn’t everyone, not just the Crown Prince, falling for this version of me?!

Experience Ophelia’s days as a magically turned little chick that captivates the Prince with her deadly cuteness that changes the original story!

Night Of The Abandoned Duchess

0
I Became The Male Lead’s Pet