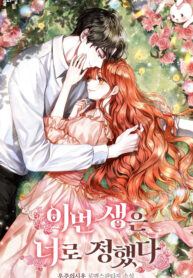 She possessed a character in an unfinished romance fantasy novel.

Twelve years of unrequited love, a fragile princess who is expected to die on her birthday, Sienna Stern!

She vowed to survive by overcoming the tragic narrative of the original story.

Then, one day, Sienna gets into an unexpected incident at the library where she was going to collect information.

It was a virtuous incident.

The supporting character in the original novel, Count Dandelion Mont, appeared in front of her.

“I’m about to go crazy at that man’s beauty!”

With dreamlike visuals and loveliness that no one can imitate, Dandelion has become Sienna’s favorite at first sight.

She is determined to make him her own. And so, she starts bombarding him with crazy love attacks.

Sienna is increasingly becoming a special person to Dandelion, who has lived a lonely life for a long time, due to her aggressive approach.

Soon, the two people quickly get close to each other and feel happiness through each other…

Her life plan changed in an instant by this big and precious Dandelion.
Can Sienna be happy with Dandelion as she wishes?

My Husband Will Regret This

When The Count’s Illegitimate Daughter Gets Married

0
I Choose You For This Life