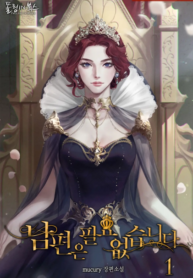 She spends the night with Berthas, a man she meets at a resort, unable to overcome the annoyance of the nobles who insist on her having an heir.

Berthas whispered as he watched her petals dripping with love liquid. He quickly put himself in the wet place. Berthas felt himself being tightened from all around.

He can’t get away from this woman.

“It will be better now.”

He moved his body slowly as Berthas felt her insides warmly wrap around him. Her soft inside felt good. Feeling the thrill of excitement rush to the top of his head, he violently pounded her.

He thought, ‘I should have this woman…’

…This woman who gave her everything to him.

But, how futile was that thought.

As if the promise meant nothing to her, Isilis disappeared from his side without a word. It was as if the long night that seemed to never end did not exist in the first place.

Berthas wandered in search of her.

The moment he finally met her again, he realized that Isilis was the Empress of the Larchen Empire, and that she had slept with him to have her heir.

“Was it because…you need a child?”

Berthas’ trembling voice turned to Isilis. As though he was the only one who remembered and pondered about the past, his heart was pounding as if it had been engulfed in a scorching fire.

From her red lips, an answer that broke even a single expectation came out.

Gazing at her with wounded eyes at the answer he had not hoped for, beyond the wounds in his eyes, the obsession that had never been extinguished until now was swirling with a darker color.

“Then, what about me? What have I been to you?”

0
I Don’t Need A Husband