I Sought Out the Tragedy’s Scheming Mastermind 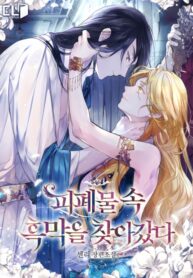 I Sought Out the Tragedy’s Scheming Mastermind Average 4.5 / 5 out of 25

I reincarnated as the villainess, Eliana Mussieux, who was killed by the scheming Emperor.

Rather than do nothing and die according to the novel, I planned a path to survival by seeking him out.

I haven’t done anything yet, but the Emperor started to cling onto me first.

Verkley grabbed Eliana’s collar. His gaze was entirely focused on her. Then, he whispered imploringly once more.

“You tamed me, Lili. You have to take responsibility.”

He bound her hands so she wouldn’t move. Before she knew it, Verkley’s lips touched Eliana’s fingertips.

From her fingertips to the back of her hand, his lips trailed kisses as if he were leaving a trace.

His eyes were fixed on Eliana the entire time.

With an unreadable expression, he pulled Eliana’s arm.

And closed the distance between them.

Then growled low with an insidious smile.

I’m In Trouble Because My Husband Is So Cute

I Reincarnated As An Evil Duchess

0
I Sought Out the Tragedy’s Scheming Mastermind