If You Get Caught in the Villain’s Snare 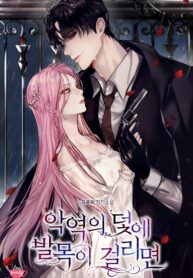 Six years had passed by after I set fire to the mansion and ran away.
I thought my family had already forgotten me, but they started searching for me after all this time.
One hand reached out to me as I desperately tried to escape from their clutches.

“I’ll let you go when the rain stops.”

Robin Vhind, a suspicious man who followed me, claiming that he was worried about me.
Having no choice, I stayed with him at his place despite knowing only his name and nothing else.

A sense of deja vu. Friendliness without reason.

“If someone harms you, for whatever reason, I’ll get rid of them.”

As my defenses dropped one by one, I eventually fell for him.
It felt like I was truly special whenever he spent time with me.
But beneath this kind mask, I saw his true self…

The more I tried to escape, the worse Robin’s obsession became.

“Just give up. So that I can be kind to you until the very end.”

What am I supposed to do with this lunatic?

The Time-Limited Duchess Will Do Anything for Eternal Life

I Sacrificed My Life, But He Was A Tyrant

0
If You Get Caught in the Villain’s Snare