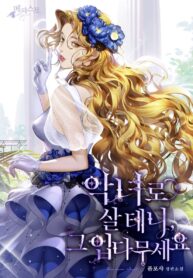 She possessed the body of a villainess inside a complicated, garbage novel.

She’s also the villainess who beats the lovely heroine.

“You want to break up? Then be Erise’s maid. If you learn how to be ladylike from her, I’ll consider breaking up with you.”

The crown prince said, talking about their marriage.

“Your Highness, the empire’s affairs must be tiring, so you and I must help the emperor. We have to work together.”

“You’re the princess, aren’t you? If you keep him around, his status will help you.”

Even though it’s not decided yet, many proposals came to her.

“If they keep bothering me, I will become a villainess that surpasses Veronica, you bastards!!”

“If you hadn’t acted like that… If you had shown that you were such a person right away, it wouldn’t have been so difficult for me to give you my heart.”

However, the crown prince thought differently.

“You always surprised me. That’s why I don’t want to give up my princess yet.”

The prince who often makes reckless proposals said to me.

“My master… have you abandoned me?”

A sexy decadent assassin, who is the head of the underworld, she should avoid said, but he is difficult to turn away from.

“This world is real. Because I made it real for you. For that reason, want more, crave more. You can have whatever you want.”

An archangel who seduces her by revealing his wonderful collarbone said that he will make this cheap novel into a real world for her.

“Didn’t you have a peanut allergy?”

Even the original heroine knows for some reason that she’s not the real Veronica!

The villainess’ life is too difficult for a mere citizen of Korea!

My Husband Will Regret This

I Became The Stepmother Of An Irrevocable Dark Family

0
I’ll Live As A Villainess, So Shut Your Mouth