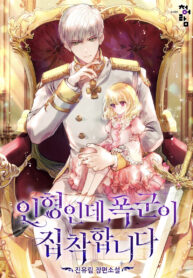 Others usually appeared as human when they possessed a character in a book, but I possessed a doll.

It was also a favorite doll of the tyrant whose neck went flying because of the male lead.

‘I’ve already died once, but I don’t want to die again!’

To survive, I must edify the tyrant.
To do that, I must first move my body… What? Oh, it’s moving?

“Are you really Chloe? No, who are you?”

A young emperor of the Burgundy Empire and a tyrant with the end faith of dying. Reclaim my body while edifying him!

The hair was not black.

Instead, it was shiny gold. It was the same color as the doll.

“…Chloe, are you really here? But why do you look like a doll?”

From the time the doll moved its hand, he had an expectation that Chloe might have been in it.

In such a situation, although it looks translucent, there is a person who looks exactly like a doll, so it is worth expecting that it was Chloe.

Because in the end, people just believe whatever they want to believe.

“I am not the princess.”

His eyes shook greatly at the firm answer.

I Am A Daughter Loved By The Devil