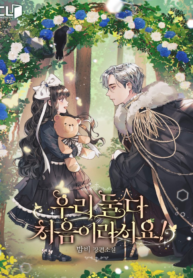 She had possessed the daughter of a secret woman and the male lead who became a tyrant after knowing the death of that woman.

Her father, who she first met after losing his mother, is already on the verge of being a tyrant.
I’m not going to get killed right……?

I can’t do this. I’m going to make him look like a real person first!
But there was a problem with my training?

“My daughter said her dad was the best in the world.”
Dad, who had the scent of blood, said.

“Mariette, you are my salvation and my God. Because you have saved my life.”
The crown prince thought she was a crybaby fairy.

“I will follow you until the end of my life. Queen of the Witches.”
Even the witches who used to live in discreet.

“Where are you looking? Don’t look at him and just pet me.”
I thought this wolf had become extinct, but I picked it up by accident.

Not only my dad, but everyone’s affection for me is too much.
What if I get sick?

I Received a Prophecy That My Fiancé Would Change His Mind

0
It’s The First Time For Both Of Us