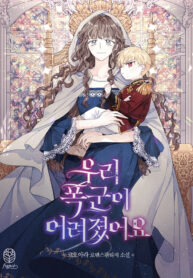 I had possessed a character inside of a book. Into the book where I pushed the ‘ Female Lead x Emperor’ pairing. The day I shed tears over the two characters that don’t end up together, I was sent here to experience the whole story. Of course I am!

“Stand in line to hear my prophecy!”

I began to make money from the contents of the book. Guys! You don’t have to end up together, but you have a lot of money but I don’t. So after three months, I am brought to the Imperial City by the name of the Emperor after spending money in prophecy, following the original truth, the law of Man-go, the golden almighty. Then I met the Emperor for the first time–

“You know everything.”
“Yes, I know a lot.”
“Yes, then can you tell me when I’ll come back to my original state.”

Finally, the emperor appeared beyond the white cloth was a four-year-old kid.

…why is he so young?

One day, in order not to be caught pretending to be a fake prophet, she struggled to find a way to solve the curse next to the baby emperor. He asked.

Persyllion’s eyebrows raised because of her firm answer. He didn’t like her simple reaction, so he looked at her face and raised his thumb.

“You look like a baby who is the cutest, most thrilling, and always gives us new cuteness……?”
“…….”
“Like an angel from heaven that had a task to defeat all evil with your cuteness!”
“Get out!”