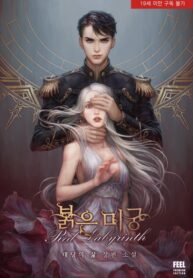 “Princess of Argonia, are you the God’s maid of honor?”

The aggressor of the continent stared at her through his piercing eyes.

It wasn’t that he had a sword, or that he was mocking her.

He just looked at the Princess of Argonia, as if he was going to unravel her. He was staring at her with those beautiful, cynical, cruel, cold-blooded, and horribly greedy blue eyes of his, that she thought she had committed an unforgivable crime.

But neither in her hometown, nor in the imperial palace, can she escape from a man who was trying to plunder her.

“As I slept, ate, hugged another girl, or even killed someone, I only thought of you.”

Licking his lips with his tongue, he burst into laughter.

At that moment, the man whispered some words to her ear, that sounded quite harsh.

“If you fly away, I’ll break your wings.”

You have to cry in my arms forever. Like a white bird in a cage.