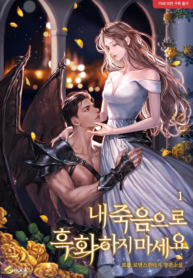 She became the villain’s first love.
Her only way back to her original world was if she could prevent the villain from becoming evil.

But apart from that, he was the strongest in this world and at the same time the prince of the demon realm.
She already expected to have a very difficult road ahead of her, but something was a bit strange.

Secretly shedding tears while reading novels,
Being a bit cranky, but also a bit shy,
And as far as being warm-hearted,
He made all kinds of caring things for Liv without even a sign of displeasure.

While a close relationship that had no label continued like this,
But there was a secret between the two of them that other people didn’t know about.

Liv made a contract with Camian, the prince of the demon realm,
And every fortnight, blood was being given to him and rituals were being held.
During the ritual, Liv becomes uncontrollable with her lust.

Liv climaxed on Camian.
And Camian just held Liv and relieved her arousal.

Then one day,
Liv discovered that the lust boiling within her had left and was instead redirected towards Camian.
But to prevent him from becoming evil, she had to get away from him.

The woman struggling to prevent the villain’s turn to the dark side, ‘Liv’
And the man with an unrequited love while being clumsy about expressing himself, ‘Camian’.

Thank You For Being Trash