Surviving As A Fake Princess 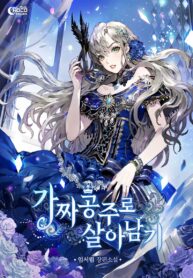 I thought I died in an accident, but I suddenly reincarnated as a villainess in a novel whose miserable death was already set in stone.

As a fake princess who had a fraudulent bloodline—

I decided to do whatever it takes to survive.

I didn’t abuse the male lead. Instead, I saved him.
I fed him well, dressed him well, healed him, led him towards the female lead, then let go of him amicably.

That was all that I planned to do.

“I think it’s time for you to return to your hometown. Don’t you think so?”
“My arm hasn’t healed yet. And my sides still hurt.”
“But you can still walk, can’t you?”

The male lead looked at me with eyes brimming with tears.
Like an abandoned puppy.

Why aren’t you going back to your house? Aren’t you set to become Emperor?

“Now that you have no use for me, you’ll just throw me away like a worthless dog. But I’m not a dog that’ll stupidly allow its owner to throw it away.”

The rain that had struck the poor puppy suddenly turned into snow that was obliterated by a blazing flame.

“You shouldn’t have saved me from that hell if you’re just going to throw me away that easily.”

There was a scorching fire in his eyes that seemed to light up just to devour me.

I Received a Prophecy That My Fiancé Would Change His Mind

0
Surviving As A Fake Princess