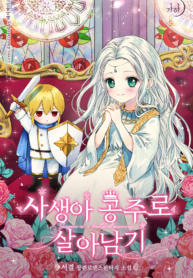 Surviving As An Illegitimate Princess Average 4 / 5 out of 37

I am an illegitimate princess who ended her short life after being misunderstood as being a child of an enemy. After nine tragic returning in past, I finally found out who my father is.

It was Paeon, the most powerful knight in the continent, and had left me who is the fruit of his forbidden love with the princess!

In order to survive the harsh royal palace, I decided to take advantage of this ill-fated father and throw him away.

Do you think I’ll be my successor, for grandpa who watches, and knights who follow me like puppies?

I’m going to be the strongest as soon as possible and escape this boring country!

Leo, the son of the devil, happened to meet me while growing up. I may be rude to my dad, but I feel pity towards the hostage, so I secretly took care of him…

“Oh, you shouldn’t be engaged with anyone.”
“…Huh? Why?”
“Because I’m responsible for you for the rest of my life.”
“What?”
“We’ve been together for the night.”

What is this prince even saying?

Can the unlucky princess change her fate?

0
Surviving As An Illegitimate Princess