That Villainess Is A Man 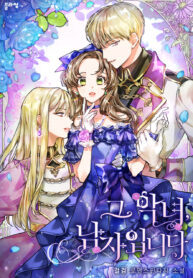 Becky was sold to the Grand Duchy of Bernum due to the financial downfall of her family.
It is a hopeless situation, but she is not upset about this development.
Mostly because she reincarnated with memories of her past life.

And there, Becky meets a dazzlingly beautiful but somewhat feisty girl.

It was Liande, the heir to the Grand Duchy and her new owner.
Becky, after becoming the best of friends with her, realized that she is curt but strangely kind.

But surprisingly, Liande’s gender is actually male.
He disguised himself as a woman to take the place of his dead sister.
He is taking on the position of a new successor, which is inherited only by women.

He couldn’t open his heart to anyone because of the great secret he had.
As the days pass he is getting more and more affectionate with Becky, who is bright and honest…….

The deeper their feelings get, the closer they get to each other, and the more they might avoid the unfortunate future they may have.
Will they ever have a happy ending?

0
That Villainess Is A Man