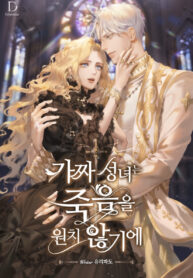 Falling into the abyss takes but a single moment.

When the real Saintess appeared, Elicia, the fake Saintess, was driven into being a witch.

A second chance appeared through the flames surrounding the stake. Elicia returned to the very day before the Saintess oracle had come down.

“Before my breath ends, I will lead you all to destruction.”

To avoid becoming a saintess, Elicia goes to a monastery to become a nun going against everything, however……..

“If it’s for you, I’m willing to use any means necessary.”

Edwin, the priest of the monastery who had sworn eternal purity to God, said.

Edwin was willing to leave everything behind and become a sinner just for her. So she plans to take revenge by borrowing the hands of the priest but…