The Impact Of The Villainess’ Fake Marriage On The Ending 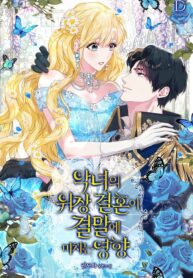 The Impact Of The Villainess’ Fake Marriage On The Ending Average 4.4 / 5 out of 38

It’s been eight years since she possessed Adeline, the ‘villainess’ in a book called 〈 Beyond Orange 〉.
In order to end this tiresome possession, she tried to create the ending of being killed by the male protagonist—exactly as the book says.

Although she even lied to the male protagonist, who doesn’t seem to intend to act the way he did in the original work, saying that he would die if he married her,

But the moment Adeline turned around, Kael’s low, abating voice caught her.

Something was going astonishingly wrong.

Lovers Beyond The Mirror

Princess Or Whatever, I’m Going Home!

0
The Impact Of The Villainess’ Fake Marriage On The Ending