The Male Lead’s Boyfriend is Obsessed With Me 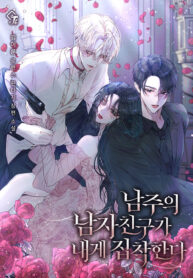 I fell into a crazy AF noir BL novel.

I became the obsessive Yandere villainess who had a crush on Baekcheon’s boss and brutally died during the main characters’ first meeting!

As I was thinking about changing their love story, which ended with the death of my favorite mischievous Uke, into a happy ending but,

Huh? I was kidnapped by the bare hands of my bias.

‘I really liked you. But this is too much!’

To survive in a plot that develops similarly to the one in the novel, I tried to seduce my bias a little. Just to the point he would think it’s a bummer to kill me.

However, something was odd.

“Try and see if you can run away, Princess.”

“Now that I have set my eyes on you, I think I’ll do something outrageous.”

The male lead’s boyfriend began to obsess over me.

Dangerously, it’s too dizzying to even think of running away.

0
The Male Lead’s Boyfriend is Obsessed With Me