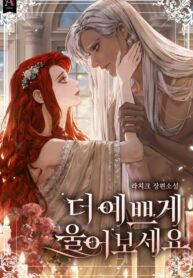 Daemi played with fire for the first time in her life.
It was Akkad Valerian, a prodigy who was known in the capital.

It was quite impulsive of her to sleep with him as Daemi’s first love just broke up with her yesterday.

“Look for another man.”

And her stepbrother, who manipulated her from behind, laughed.

“I told you, right? You’ll come to me eventually.”

Daemi got tired of all these things.

So, she seduced the man who had just arrived in the North today and slept with him.

Akkad was as handsome and lustful as the rumors.

“You have a pretty face. Cry some more for me.”

Tired of persistent political affairs, he caught Daemi’s ankle as she was trying to run away, and coveted her even more.

Daemi, who was lying underneath a ferocious beast, cried until her voice became hoarse.

The man persistently licked her eyelids.
And soon, he laughed greedily.

“Keep crying under me.”

The man whispered in an impudent tone, “Until your legs are torn apart.”
……It seems like I chose the wrong person to play with fire.

Surviving As A Fake Princess

The Villainess Is Shy In Receiving Affection