Why The King Needs A Secretary 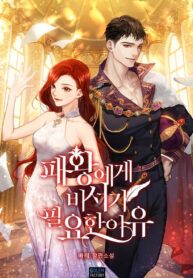 Celestia lives in the back alley of Golddina and has a skill that can dispel magic.

She thinks that her skill is useless and supports her talented friend Serengevan instead.

“Get that crazy b’tch out!”

But he betrayed her and sold her as a slave even though they promised to get married.

In her inescapable despair, a man who looked to be a nobleman appeared before Celestia and seeing his condition, Celestia proposes a deal to him.

“I can heal the disease you are suffering from.”

“…Where did you hear about me?”

The man’s face was getting increasingly scary but Celestia wanted to live.

She eventually got what she wanted, and arrives at a place which resembled the imperial palace.

“In the future, call him ‘your majesty’.”

“Of course, he’s the one and only Emperor of the Burg Empire, Van.

Surprisingly, the identity of the man is…

The king of the Burg Empire, known as the Red-Eyed Psychopath.

Celestia became one of the king’s subjects,

Can she survive safely?