You Promised To Divorce Me 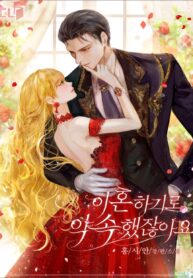 A girl entered the world of a romance fantasy novel, in which the original heroine had entered the villainess’s body.

The only problem was…

She was betrayed by the story’s claimed main character, in other words, the heroine’s younger sister.

She would survive without meddling with the story.

She successfully escaped her terrible family’s clutches and got married to the strongest extra character! Since she got married, she acted her part and lived to the fullest.

Because their marriage was nearing the end of the contract, it was time for a divorce.

Her face heated up at the sudden attack.

“How can my wife abandon me so heartlessly?”

‘No, we definitely promised to divorce!’

I Sought Out the Tragedy’s Scheming Mastermind

0
You Promised To Divorce Me