I’d Rather Abandon Than Be Abandoned 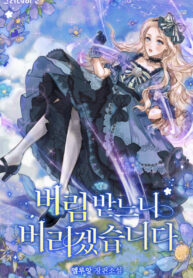 I transmigrated into an otome game. The problem was I didn’t possess the heroine, Naila, but the villainess, Claudia. And just like any other villain, Claudia’s social reputation was the worst.

“Don’t go overboard. I know you can’t stand seeing your sister getting praised, but if you do more than this, it’ll only make you look ugly.”

…My real brother despised me.

“Ck, I hope you understand that you have no chance. When will you realize that it won’t work no matter how desperate you are.”

If this continued, I would die unjustly at the guillotine because of the sins I did not commit.

Therefore, in order to get help from the cursed prince, I offered him a fake marriage.

“I don’t want a poor fake marriage like this. If you’re going to do it, it certainly means that we need to uphold all the responsibilities as a married couple. I’m talking about outside and inside the bedroom.”

Isn’t the prince too absorbed in his role as a husband? Furthermore, Naila, the original heroine, was suspicious. Why was she trying to drive me into becoming a bad person? Was Claudia really a villainess as people believed?

What to do to survive:

1.Release the prince’s curse.
2.Make my family take my side.
3.Find the five spirits and sign a contract.
4.Take off the stigma of being an evil woman.

I’m A Villainess, Can I Die?

Under The Devil’s Breath

0
I’d Rather Abandon Than Be Abandoned