If You Wish For Something Useless 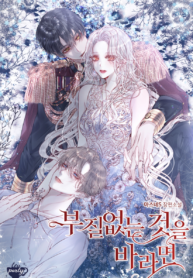 Evelyn was a stranger and didn’t share a drop of blood with them.

There was no place for an impostor who acted as a replacement for the sake of the graceful main character.

‘If I’m meant to be kicked out and killed anyway, I choose to leave on my own two feet over experiencing a miserable death again!’

Evelyn spoke simply, attempting to disguise her dismay at the unexpected meeting.

“Young Master, it’s been a while.”

It happened in a split second. Ethan approached her rapidly from a few feet away and stood nose-to-nose before her.

Evelyn winced when she noticed it.

“Even if we don’t see one another often, the fact that I’m your elder brother and you’re my sister will not change.”

He used to utter such things in a sweet voice, but everything changed, now that he knows they don’t have a single drop of blood in common.

I Reincarnated As An Evil Duchess

0
If You Wish For Something Useless