The Little Lady Is A Revenge Maker 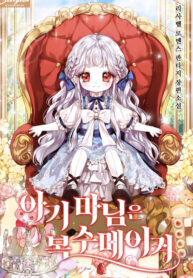 In order to survive, I decided to become the bride of the Grand Duke’s heir.

“Even if we get married, we can always get divorced.”
“Accepted.”

It was nice to be chosen as the political bride of the Little Prince.

But how did it end up this way?

Her little fiance turned out to be a bit crazy for a kid the same age as her.

“You are the most beautiful part of my life.”

Even the heart of the war-crazy Grand Duke, her 300-year-old father-in-law, was won over by her.

“You say you want to help with the business? Keep bothering me and I’ll scold you with a blank check!”

So she also became the business partner of her future grandfather, the 350-year-old who was crazy with money.

“This isn’t how it was supposed to be!”

The original plan was to get into a contractual marriage and just live lavishly.

But what’s this? Now a plot by the royal family doesn’t allow Sefjäll to do what she’d planned from the beginning?

“Since it’s like this, I’ll just take everything with the premise of revenge.”’

# Let’s start with the people that are on the death note.
# Growing-up in a romance is a virtue.
# I’ll succeed in business, revenge, and love.

The Impact Of The Villainess’ Fake Marriage On The Ending

0
The Little Lady Is A Revenge Maker