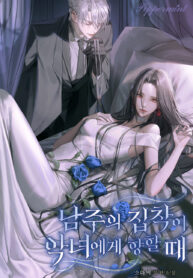 When The Villainess Became The Male Lead’s Obsession Average 4.2 / 5 out of 112

I possessed a villainess character, the female protagonist’s elder sister, who harassed the main characters.

I wouldn’t bother them because I didn’t want to die in the male protagonist’s hand like in the original story.

I tried my best to connect the two, but…

The male protagonist was acting weird.

Later on, I tried to send him to the wizard tower as it was written in the original story, but for some reason, he tried so hard not to go even if he had to die.

I ended up saying what I shouldn’t have said to make him go.

“What’s the benefit of having you by my side?”

“I will listen to you from now on. I won’t whine. I won’t come to find you even if I miss you. I will just wait for you. So… So please….”

To him who begged, I answered coldly enough that I would never be there.

You’ll forget everything about me anyway.

A few years later, the male protagonist, whom I thought had forgotten me, came to me without forgetting my existence. Not for my sister, who was the original female protagonist, but for me.

I wanted to ask him back. How come you still remember me?

“It’s a pity that your father died before I could prove my worth.”

He grabbed my chin as he lowered himself.

“It would be difficult for me. Elysia.”

0
When The Villainess Became The Male Lead’s Obsession